One of the most challenging parts in IELTS is the Writing Task 1. The challenge lies in the fact that in doing this writing, we have to have the ability to read and understand data presented in graphs, and give a thorough explanation on it. The challenge also includes some other technical things such as:

a. Arrangement of ideas
b. Relevance
c.Vocabulary range (for which you will have to a lot of paraphrasing)
d. Grammatical accuracy
e. and so on, and so on

We have had several discussions regarding Writing Task 1 in IELTS. As you may have known, there are at least six types of Writing Task 1 you may get in IELTS, which are:

In some cases, however, you will have to do a combination of these data, which means, you may have to do a line graph and a bar graph at once. Or may be, a pie chart and a bar graph. The template for doing this kind of writing is not different from the template we usually use when doing the single data, although there may be some more explanations we have to give when having this kind of writing. The basic template for Writing Task 1 has been explained in
Material on Writing Task 1
Now, let us have an example of a graph with combined data. Take a look at this graph 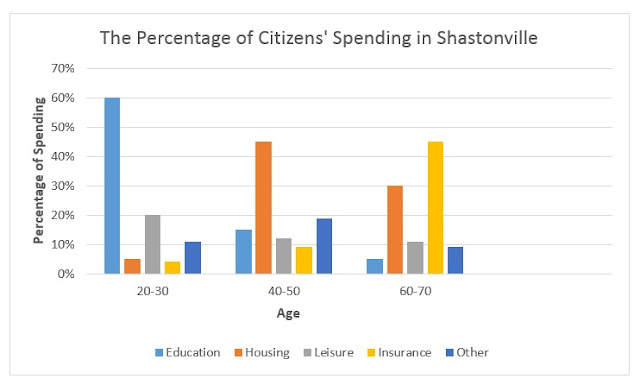 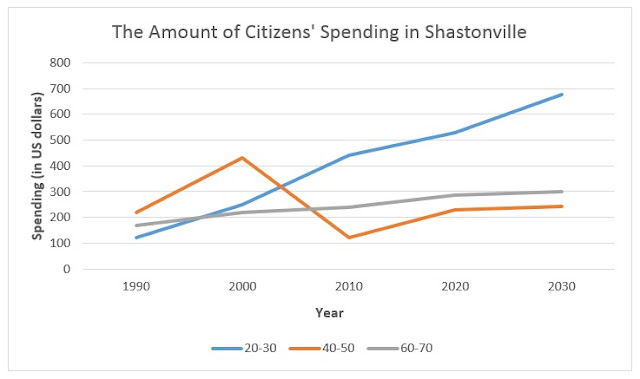 So, you may still remember that doing Writing Task 1 consists of several steps explained as follows:
1. Making an overview
2. Explaining all existing variables
3. Explaining the major trend
4. Giving detailed explanation
Now, let’s start doing the Writing Task 1
1. Making An Overview
You can do this by:
a. Introducing the graph, and
b. Paraphrasing the original title
The bar graph illustrates various types of residents’ expense in Shastonville, while the line graph presents the amount of money spent in 10 years span starting from 1990 until 2030.
Or you can make a sentence with a passive voice instead
Various types of residents’ expense in Shastonville was illustrated by the bar graph and the amount of money spent in 10 years span starting from 1990 until 2030 was presented by the line graph
List of paraphrased words:
Citizens is replaced by Residents
Illustrates is replaced by presents
Spending is replaced by the amount of money spent and expense
2. Explaining All Existing Variables
You need to explain all variables in the graph. The easiest way to do it is by paying attention to information presented in the x abscissa and information presented in the y ordinate, along with any other relevant information.
Abscissa of  the bar graph: The range of a
ges
Abscissa of the line graph: The years
Ordinate of the bar graph: Percentage of spending
Ordinate of the line graph: Spending in US dollars
Other relevant information in the bar graph: Different types of expense
Other relevant information in the line graph: The range of ages
There are three different groups of age explained in the bar graph ranging from 20-30 years old, 40-60 years old, and 60-70 years old along with their spending in education, housing, insurance, leisure, and other necessities. The amount of spending in the four decades is shown by the line graph in US dollars (the years have been explained in the overview so you do not have to repeat it).
3. Explaining the Major Trend
Major trend functions to make your ideas become more well arranged and hence, make your writing become more structured. The basic idea of using major trend is that you will divide the data into two larger groups, each with the same feature.
Major trend for the bar graph: Constant and fluctuating
Major trend for the line graph: Constant and fluctuating
The bar graph indicates that the people’s spending on education, insurance and leisure were constant, in which the amount of money spent for insurance constantly increases while the expense for leisure and education constantly decrease. In contrary, spending on  housing and other were fluctuating. The line graph shows that expenses of the age group of 20-30 and 60-70 constantly increased over years while the the expense of 40-50 age group was fluctuating.
As I said before, the major trend is used to divide the explanation on two different paragraphs, in which the possibility will be:
a. Paragraph 2 contains information about constant trend of both graphs and paragraph 3 contains information about fluctuating trend of both graphs
b. Paragraph 2 contains information about the bar graph and paragraph 3 contains information about the line graph.
In this case, let’s take option b as an example.
4. Giving Detailed Explanation
Paragraph 2 (detailed explanation of the bar graph)
People of 20-30 age group has highest spending on education comprising of 60%. However, their expense on education dramatically falls to around 15% in the next 20 years and finally reaches the lowest point of around 5% as they turn into 60 or 70. Leisure is another expense witnessing a gradual decrease from 20% to around 12% and 11% respectively. The money spent for insurance is really low contributing less than 5% in the age group of 20-30, but it experiences a slight increase of about 7% in the second age group and witnesses a significant growth of approximately 26% in the last age group. Housing expense is fluctuating as it starts from lower point of around 4% and drastically increase and reaches its peak point of around 35% and eventually degrades to 30%. Other spending experience little change in which there is only 8% growth and 10% decline.
Paragraph 3 (detailed explanation on line graph)
The line graph indicates that citizens of 20-30 age group in Shastonville has constantly increasing spending over years. They spent around 110 dollars in 1990 and their expense dramatically increases and by the third period, it accounted for around 450 dollars. The expense of the first group is projected to reach the highest point of almost 700 dollars at the end of the period. The third age group does not undergo any significant change in terms of spending, and only increases approximately 20, 10, 60 and 10 dollars respectively. People from 40-50 age group has a very fluctuating expense starting from around 210 dollars in the first period, reaching its highest point of about 420 dollars in the second period and dramatically declining to approximately 110 dollars in the third period. It is projected to experience an increase in 2020 and level off in the next ten years.
I hope that this article will be of much help. If you think it’s helpful, please share it.
-Ross