The history of clinical nutrition,or the study of the
relationship between health and how the body takes in and
utilizes food substances,can be divided into four distinct
line       eras:the first began in the nineteenth century and extended
(5)        into the early twentieth century when it was recognized
for the first time that food contained constituents that were
essential for human function and that different foods
provided different amounts of these essential agents.Near
the end of this era,research studies demonstrated that rapid
(10)      weight loss was associated with nitrogen imbalance and
could only be rectified by providing adequate dietary
protein associated with certain foods.
The second era was initiated in the early decades of
the twentieth century and might be called “the vitamin
period.”Vitamins came to be recognized in foods,and
deficiency syndromes were described.As vitamins became
recognized as essential food constituents necessary for
health,it become tempting to suggest that every disease and
condition for which there had been no previous effective
(20)       treatment might be responsive to vitamin therapy.At that
point in time,medical schools started to become more
interested in having their curricula intregrate nutritional
concepts into the basic sciences.Much of the focus of this
education was on the recognition of vitamin deficiency
(25)        symptoms.Herein lay the beginning of what ultimately
turned from ignorance to denial of the value of nutritional
therapies in medicine.Reckless claims were made for
effects of vitamins that went far beyond what could
actually be achieved from the use of them.
(30)                 In the third era of nutritional history i the early
1950’s to mid-1960’s,vitamin therapy began to fall into
disrepute.Concomitant with this,nutrition education in
medical schools also become less popular.It was just a
decade before this that many drug companies had found
(35)         their vitamin sales skyrocketing and were quick to supply
practicing physicians with generous samples of vitamins
and literature extolling the virtue of suplementation for a
variety of health-related conditions.Expectations as to the
success of vitamins in disease control were exaggerated.
(40)         As is known in retrospect,vitamin and mineral therapies
are much less effective when applied to health-crisis
conditions than when applied to long-term problems of
under nutrition that lead to chronic health problems. 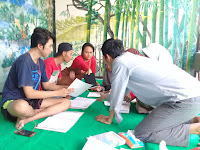