February 28, 2018 admin
The third section of IELTS test is the Writing Section which is divided into two different Tasks, namely Task 1 and Task 2. In Writing Task 1, the test takers will have to explain a graph or chart and write at least 150 words. Meanwhile, Writing Task 2 will require the test takers to write an argumentative writing that contains at least 250 words.

There are four points that we need to present in our Writing Task 1, which are:

2. Explaining the main features (such as year, percentage, etc)

Note
We have to note that Writing Task 1 will be very very objective, which means that we cannot include any information that are not presented by the graph.

In point 1-3 (paragraph 1), we will explain the graph in a very general sense. Do not include percentage, explanation about the increase and decrease, etc. because these are two specific to be included in paragraph 1. The detailed explanation will be covered in point 4 (paragraph 2 and 3).
Doing IELTS Writing Task 1 Step by Step
Let’s take a look at this example 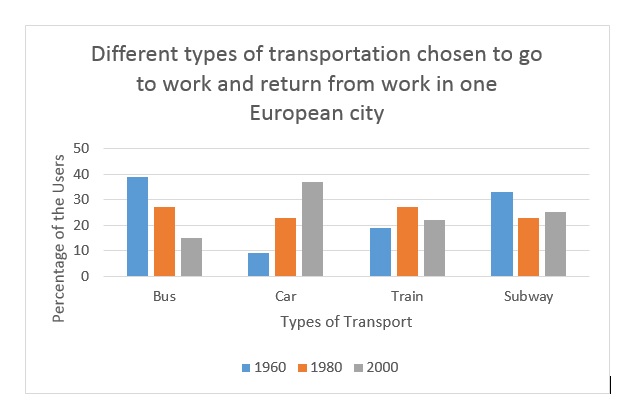 1. Make An Overview by Introducing The Graph and Paraphrasing The Original Title

We can introduce the sample graph above by writing:
The bar graph shows / presents / indicates / depicts / explains / illustrates, etc. Remember that all words typed in bold actually have the same meaning. This is a paraphrasing whose aim is to help you demonstrate your vocabulary range and accuracy. If you already use the word “show” in the first paragraph, then do not use it again in the next paragraph. Do not use the same word over and over again because it will decrease your score.

After introducing the graph, you need to paraphrase the original title Different types of transportation chosen to go to work and return from work in one European city” by:

a. Changing certain words with other words that have the same meaning

b. Changing the grammatical structure of the sentence

For example:
Various types of vehicle chosen to go to and return from work in a City of
Europe

If you feel it difficult to do it at once, you can practice by doing it step by step using the paraphrase inventory:

Besides replacing certain words, you can also change the structure of a sentence in the title:

1. Changing to infinitive phrase to gerund phrase (a)

2. Changing Noun phrase Adj+N (such as European City, Beautiful girl)into Noun of Noun (such as City of Europe, Girl of beauty).(b)

Passive voice is the opposite of active voice, in which the object becomes the center of the discussion. Active voice concerns more about the Subject of a sentence. Take a look at this example:
(a)   Active Voice
Andy takes the book from the shelve (active voice)
The sentence has a structure consisting of S+V+ Noun Phrase (as an Object) + Prepositional Phrase

or
The book (O) is (to be) taken (V3) from the library (Prepositional Phrase)
In the sample graph, the active and passive sentence will be:

2. Explain All Main Features in The Graph

From the sample graph, it can be seen that there are three features that need to be explained, namely types of transport, year, and percentage of users, and hence we write:
There are four means of transport presented in the graph which are bus, car, subway, and train along with the percentage of their users in 1960, 1980, and 2000.

3. Explain The Main Trend of The Graph

Main trend will help you to divide the paragraph two and three. The trend is usually divided into two different trends to organize the date into two different clusters. The sample graph has two different trends, namely constant and fluctuating, thus we write it as follows:
Bus and car percentages were constant in which the passengers of bus constantly decreased while car users constantly increased. The percentage of people using train and subway were both fluctuating.
4. Giving Detailed Explanation
After dividing the data based on major trend, we can use the division of the data in the second and third paragraph. The second paragraph will then concern the bus and car (constant trend) while the third paragraph will concern subway and train (fluctuating trend). There are several points that need to be explained in the fourth point of Writing Task 1, explained as follows:

a. Starting point
This is where a data starts. In the sample graph, the data starts from the year of 1960. Here is how we should explain the starting point:
The bus started from a higher point of around 39% in 1960.
Note: Do not write the year in the same style because monotonous use of words and sentence structure will decrease your score related to complexity. Paraphrase the year:

b. Increase and Decrease
Data always experience increase and decrease, and it is really important that we explain the most interesting these changes as it is presented in the data. There are two ways to do this:

1. Point achieved by the data
Bus finally reached the lowest point of approximately 15% at the end of the period.
2. The difference
Car started from the lowest point but then experienced/witnessed 29% increase.

Note
There are several words that can paraphrase the words increase and decrease, such as:

Increase: incline, level up, upgrade, experience a growth, rise, jump, etc.
Decrease: decline, fall, go down, degrade, etc.
Stagnant: Level off, do not undergo any change, experience little/no change etc.
c. Different level of increase and decrease
Sometimes, certain data will experience a drastic change. But there are several cases in which they have slight change. This point is also necessarily explained.
1. If the change is significant:
Significantly, drastically, dramatically, strikingly, etc.
2. If the change is insignificant:
Slightly, marginally, insignificantly, dst.
Catatan
Approximation
There are several chances in which a data will be between two different points (like in the middle of 10 and 20), so it is more difficult for us to decide what exact figure it actually is. In this case, we should use words such as:
of about, of around, approximately, etc.

Let’s take a look at this example


It experienced 14% growth in the following year and eventually reached its peak point of approximately 37% at the end of the period.

Exact Figure
If the data is an exact number and not an approximate, we can use several words such as:

Let’s take a look at these examples:
Bus kept degrading over years and reached the lowest point in 2000 that accounts for 15% only.
ataupun selisih dari satu data dan data yang lain
The percentage of bus users experience a significant decline comprising of 12% in the second period

d. Ending Point
Ending point explains the last point achieved by a data, usually signaled by words such as “finally” or “eventually”. Let’s take a look at this example:

The bus started from a higher point of around 39% in 1960. The percentage of commuters taking bus experienced 12% decrease from 1980 to 2000, and finally reached the lowest percentage of around 15% at the end of the period.
Here is an example of Writing Task 1 for the sample Bar Graph:

Task 1 Sample – Bar Graph
The bar graph indicates various types of transport used for commuting to and from work in a city in Europe. There are four means of transport presented in the graph along with the percentage of their users in 1960, 1980, and 2000. Bus and car percentages were constant in which the passengers of bus constantly decreased while car users constantly increased. The percentage of people using train and subway
were both fluctuating.
The percentage of car drivers started from the lowest point of all existing figure, comprising of 9% in the year of 1960. It experienced 14% growth in the following year and eventually reached its peak point of approximately 37% at the end of the period. Bus, however, had the opposite pattern in which it started from the highest point of approximately 48% and gradually degraded and ended up contributing only 15% at the end of the period.
The percentage of commuters taking train and tube underwent ups and downs and the change from year to year was not very significant. Train started from less than 19% in 1960, and slightly increased and almost reached 27% in 1980. However, the percentage downgraded again in 2000. Subway experienced 10% decrease but eventually climbed up and reached 26% in the year of 1980. In summary, people’s preference in different modes of transportation changed over year, whether it kept decreasing, increasing or fluctuating.
For Exercise on Writing Task 1, please visit this link
Exercise on Task 1