August 8, 2018 admin
IELTS Writing Task 1 Vocabulary
In the IELTS writing, your mastery of English vocabulary as well as the accuracy will be one of the most crucial part, since it becomes one of the four criteria graded in the test (It is called Lexical Resource in the IELTS test). In my personal opinion, vocabulary should be one thing that deserves your serious attention.

However, Writing Task 1 is known as a part where everything is sort of predictable. It is not that Writing Task 1 is easier than Writing Task 2, but it is commonly known that there is a template for Writing Task 1, by which you can do the task simply by using the pre-determined writing structure. By strictly following the guideline, a test taker can arrange their idea better and make the flow of the ideas easier to understand.

Writing Task 1 consists of several parts, namely:
The way you write each part of the writing is almost similar. For example, overview is written by giving general information about the data, and the typical style would be:
There may be some other ways of doing this (like changing the sentence into passive voice), but as far as I know, a Writing Task 1 always begins with the same explanation.

Advantages
The objective nature of IELTS Writing Task 1 will make it possible for you to prepare yourself with the most effective template. There are several writing template that you can use, and you can find one them here.

If you already master the writing template, you don’t have to worry about the structure of the writing, the kind of information you want to include in certain paragraph, or any other things that will slow you down. You just need to start with your own template and fill the ‘gap’ by looking at the data given in the te
st. It’s more like fill-in-the-blank kind of job you do in Writing Task 1.

Here is an illustration of the so called fill-in-the-blank job you should do in the IELTS test.
The pie chart compares the number of people who have mental problem at an age of 20 in in 1990-2000
Paragraph 1
Vocabulary for the Overview
Overview
The given [insert the type of presentation here –which is Pie chart] [insert the verb here, and make sure that you don’t repeat it over and over again, use it once only in your writing] [paraphrased version of the original title].

Explaining Main Features
There are [how many mental problems depicted in the pie chart –let’s say 5] which are [V3 –remember, paraphrase the verb] in the pie chart, along with the number of people having the problem by the age of [see the data] years old in a period of [how many years, see the data] starting from [when is the starting point]
Explaining the major trend
It is clearly indicated in the [type of presentation] that a significant number of people have [what mental problem] and [what mental problem]. Meanwhile, only [how many] of the total cases is represented by the other types of mental disorder.

After filling out the ‘gap’ by using information given by the data, the whole paragraph will probably look like this:
The given Pie chart describes the proportion of citizens having mental illness in their 20s. There are 5 types of mental health issues which are shown in the pie chart, along with the number of people having the problem by the age of 20 years old in a period of ten years starting from 1990. It is clearly indicated that a significant number of people have anxiety problem and bipolar disorder. Meanwhile, only a third of the total cases is represented by the other types of mental disorder.

Note that I never use the same Verb over and over again, and instead, paraphrase it with other verbs whose meaning is similar (or close).

Examples for IELTS Writing Task 1 Typical Overview
Tips
a. The line graph illustrates the n
umber of people being arrested in the year of 2000 (one graph, therefore you need ‘s’ inflection)
b. The line graph and the pie chart give information about the number of people being arrested in the year of 2000 along with some of the main factors why they were arrested (there are two graphs, which means that you won’t need ‘s’ inflection).
This kind of detail will determine the score for Grammatical Accuracy, so make sure that you give it serious attention.
Vocabulary for Key Features
In this part, you want to give a very clear information regarding the what [what types of mental disorder], when [what year is depicted in the data] and how [how many people having that sort of mental problem]. However, this will entirely depend on the data. Sometimes we need to explain the where as well [for example, this data refers to the number of people with mental problem in New York City].

It is very important that we include all key features of the data. This is because the key features will determine how the next paragraph should be written. Year, for example, will determine what tenses you should use in your writing. In the case of bar graph and line graph, the features are usually presented in Cartesian diagram. Take a look at an example below: 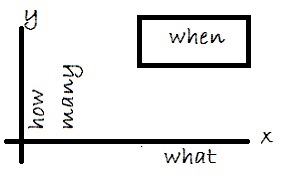 The line graph gives illustration of the percentage [take a look at the ordinate] of people dying from attack [see the abscissa] in the year of 2000, 2005, and 2010 [see the box].

Remember that the word percentage is usually replaced by ‘proportion’ and ‘a number of’.
Tips
To make everything clear, take a look at another example below:
The line graph gives illustration of the percentage of students studying abroad in the year of 2000, 2005, and 2010. There were more and more students who studied overseas, and it is indicated by the trend which constantly increases over years.
Look at an excerpt taken from the first paragraph of IELTS Writing Task 1 above. You see that there is a combination of Past and Present Tense there. Notice that the Present Tense is always used to refer to the data, such as:
You may also realize that the Past Tense is always used to refer to the increase of the number of students studying overseas (the phenomenon):
Vocabulary for General Trend
General trend gives a very broad explanation of what is being presented in the graph. It is (also) used to further organize ideas in the second and third paragraph. A good organization of ideas will make it easier for the reader to get your point, and it will give you higher point in a criterion called Coherence and Cohesion. To explain the general trend, these typical expressions are commonly used:
Example
It is clearly depicted in graph that the consumption of milk had significantly increased in the last two decades, while the daily consumption of coffee and tea experienced ups and downs.

Tips
Author’s Note
I actually want to finish this writing but it’s too long, this article. It is not convenient to read long and tedious explanation, so I will split the article into two. The last part of the IELTS Writing Task 1 (which is the detailed information) will be explained in the next post. Make sure that you follow along with my explanation on IELTS Writing Task 1 Vocabulary.

Update
The next article about IELTS Writing Task 1 vocabulary can be read here
Category: Tutorial TOEFL